Not since the introduction of the forward pass has the game of football witnessed a more daunting offensive innovation – the no-huddle offense. Today, the top scoring teams in the NFL deploy the no-huddle with deft precision.

This offense is executed by the league’s marquee quarterbacks including Tom Brady, Peyton Manning, Aaron Rodgers, and Drew Brees. It has been a game changer – faster tempo, more offensive plays, more opportunities to score.

Football, over the years, has become a faster, more specialized and more competitive game as teams relentlessly seek a competitive edge.  This is primarily due to continuous innovation.

Today, for example, there are offensive and defensive coordinators who have specialized coaches for each player position – quarterbacks, running backs, receivers, linemen, linebackers, defensive backs.  There are special teams for kickoffs, punts, and field goals.

“The huddle isn’t an endangered species yet, but it seems inevitable that we are moving toward an NFL that will someday run predominately no-huddle or hurry-up offenses. This is a logical progression in the evolution of the strategy and tactics of the game, and it’s already starting to change football in profound ways.” – Brian Billick, Sep. 19, 2012

Teams pour over opponents’ game film looking for exploitable weaknesses. They analyze team and player performance statistics to determine the best match ups.  It all results in a sophisticated game plan designed uniquely for each opponent.

The game may be won or lost on the field, but successful teams are generally the best coached and best prepared.  They play by the rules, but understand that pushing the envelope is critical in achieving competitive advantage.

For example, since the game’s inception, calling plays from a huddle has been the accepted status quo. The offense encircles the quarterback to hear the play call and then comes to the line of scrimmage to execute on a predetermined snap count.  While the offense huddles, the defense uses the time to freely substitute and confer with coaches to set up their defensive scheme. In 1976, the NFL introduced the play clock to speed up the game.  The new rule allowed an offense 40 seconds to execute a play or be subject to a delay of game penalty. The play clock sped up the game.  Offenses and defenses had to adapt.  The rule resulted in more innovation.

The Impact of the No-Huddle Offense

Enter the no-huddle which takes offensive advantage to a whole new level. Although it was originally introduced in the NFL in the late 1980’s, it has evolved over the years into today’s potent offensive juggernaut.

By calling plays at the line of scrimmage, the quarterback has more time to assess the defense and call the play that best exploits its vulnerabilities, and no sooner is one play completed and the offense is setting up for the next.

This puts considerable pressure on the defense which has little time to prepare and no time to substitute. The no-huddle causes the defense to become confused, frustrated, and exhausted.

The no-huddle has fundamentally changed the game of football. It has impacted who teams recruit; how they practice; how they develop their game plan; how they call plays, and how they execute.  The no-huddle is a relentless offensive philosophy.

It has a bias for scoring.  It exploits time to its own advantage and to the disadvantage of competitors. Teams that employ the no-huddle are those that understand that speed, smarts, precision and teamwork are the critical elements of success. Simply put, the no-huddle offense has been a game changer.

Football Analogies to the Business World

Like today’s game of football, business is faster, more specialized and more competitive. Operations, marketing, sales, IT, HR, and finance must be more integrated and in sync than ever before.  Simply put, organizations must act less vertically and more horizontally.

If not, a company will find itself ill-prepared to compete in an accelerated dynamic environment. Furthermore, it will  find itself at a significant disadvantage to faster, smarter, better prepared and more agile competitors.

Successful businesses compress the time between thinking, planning, and doing.  This is enable by a confluence of powerful innovations readily available and employable by market participants– the internet, mobile, cloud computing, social networking, and “Big Data” analytics, to name a few.

To succeed today, therefore, a company must change the fundamental way it competes. It must understand that speed, smarts, precision, and teamwork are the basic characteristics of today’s competitive enterprise.

Lessons of the No-Huddle Offense for Business

The game changer in business today is merging strategy with tactics to win in the marketplace! 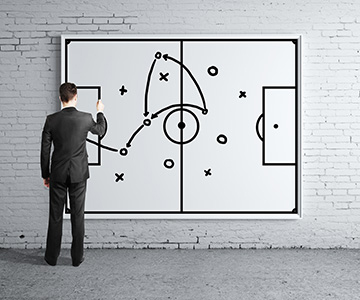