“No one ever excused his way to success.” – Dave Del Dotto Mistakes are an inevitable part of life. No one enjoys messing up – but sooner or later, it’s bound to happen. It’s how we choose to respond or react to a slight hiccup or monumental error that defines who we are and ultimately shapes our character.

Thanks to social media, our voice is heard louder than ever and information travels at warp speed on a platform that never sleeps. Big companies and small companies alike are not immune to the occasional social media faux pas and blunder.

While perfection is not necessarily expected from a brand, honesty and accountability is. Developing a reputation built on trust and integrity is the only way an organization can survive long-term in today’s market, as public perception and shared experience largely dictate a company’s success.

Here’s a quick breakdown of how brands and companies can create an honest and transparent company culture.

The No Blame Game Over the years we’ve become accustomed to companies shifting blame, finger pointing, and making up a slew of justifications to explain a PR catastrophe. It’s become the new normal for brands to omit any wrongdoing or to shrug and say they ‘didn’t know’. Insert the fake apology and hope for the next scandal seems to be the strategy these days.

So when a company owns up to their mistakes and admits to its faults, not only is it surprisingly refreshing, but it opens the door for greater forgiveness from the consumer.

While creating loyal customers is at the forefront of every brand’s mind, it’s not something that just happens overnight. It takes time and patience to forge a lasting, honest relationship.

When a brand attempts to cover up a transgression, lies and denial often do more damage than just coming clean. A willingness to take responsibility for a mistake versus using adopting evasive tactics is the first step in moving forward and becoming accountable. Take Volkswagen for instance. You may or may not remember the hot water Volkswagen got into after admitting they had violated the Clean Air Act back in 2015.

In the past, Volkswagen has claimed that its cars are environmentally friendly and fuel-efficient. So when news broke that Volkswagen had rigged the emissions test, people were shocked and felt cheated from the blatant false advertising.

Volkswagen’s deliberate lie to the public not only resulted in a loss of trust, but also led to a loss of market capitalization – which took a hit of $18 billion in one single day. Apparently people don’t tend to root for brands that try to pull the wool over their eyes.

In a press conference announcing his resignation, Volkswagen CEO Martin Winterkorn made a feeble attempt to downplay his role in the events.

“I am shocked by the events of the past few days. Above all, I am stunned that misconduct on such a scale was possible in the Volkswagen Group. As CEO I accept responsibility for the irregularities that have been found in diesel engines and have therefore requested the Supervisory Board to agree on terminating my function as CEO of the Volkswagen Group. I am doing this in the interests of the company even though I am not aware of any wrong doing on my part.”

Honesty starts at the top of a company and sets the precedent for how others should act. Volkswagen’s leadership is a reflection of the company, of the brand, and of the people who work there.  The bottom line is, actions have repercussions.

In the long run, feigning ignorance about what was going on in the company will do little to help the Volkswagen’s brand image. It will be interesting to see how the company decides to move forward and how it will prevent further offenses in the future.

Communication is a Two-Way Street

“The single biggest problem in communication is the illusion that it has taken place.” – Georgia Bernard Shaw, Leadership Skills for Managers The difference between success and failure, growth and remaining stagnant, are largely influenced by an organization’s willingness to communicate and clearly outline what it expects to accomplish.

The best companies out there are transparent in their dealings, and are open about when they are wrong. The only way to thrive and move forward is to admit mistakes and accept responsibility. The alternative route is to cover up an error and drag out a problem that has the potential to blow up on an even grander scale in the future. Smart companies realize that promoting a culture of truth is one of the most powerful marketing strategies out there. At the heart of it, consumers want to feel good about where they’re buying their products.

Consumers want a brand that has a conscious. It’s no longer enough for a brand to just sell a product. Products must have a purpose, and a brand must have values and integrity in order to differentiate itself from everyone else.

Over the years, brands will continue to release newer and shinier products to please the masses. What will remain the same are the values and beliefs of a company.

Social media in particular is a way for companies to give consumers an inside look at how their company runs and what code of ethics they follow.

If a company can show that they are presenting the facts and are remaining open and honest, consumers will take note. 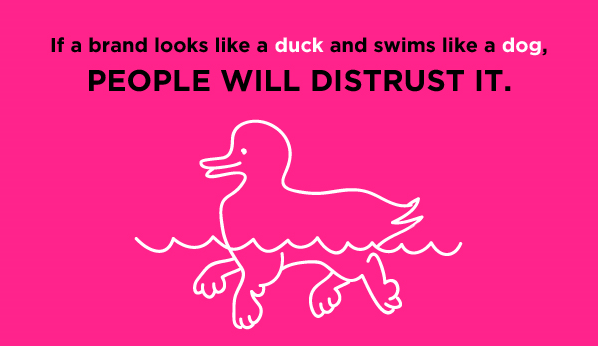